MARION – New arrangements have been made for the Sultana Disaster Museum in Marion, Arkansas.

The museum tells the story of an explosion of the steamboat, the Sultana, that occurred April 27, 1865.  During the Civil War era, the boat was designed to carry only 376 passengers plus crew. Investigations revealed a great deal of corrupt practices, including bribes paid to high-ranking Union officers causing overcrowding on the vessel. Three of the boat’s four boilers killed nearly 1,200 of the more than 2,100 passengers and crew. 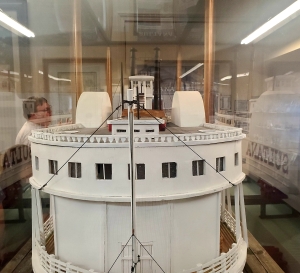 A 14-foot replica of the Sultana is available for viewing at the current museum site at 104 Washington St. in Marion. Photo by Crystal Carter Harrell

Project director Louis Intres said the new museum will be located on Old Military Road in the old Marion gymnasium, two blocks from the current site at 104 Washington St.

“It will be remodeled and repurposed into a 14,500 sq. foot state-of-the-art museum and archive and replace the existing 1,000 sq. foot museum,” Intres said.

“Architects working on the design will make the museum interactive and modern, which will entertain as well as educate people of all ages,” Intres said.

Three years ago, the museum confirmed the location of the Sultana.  It sits 37 feet below a soybean field in Crittenden County. They are currently working with state agencies to develop a monument.

“Want to hear something interesting? I work for a farmer in Marion in the fall. The Sultana sunk on his great grandfather’s land,” museum visitor Tony Sasser of Marion said.

Jere Norville, doctorate candidate at the University of Memphis, gives tours of the current Sultana Disaster Museum on Fridays.

“Now, we’re just fundraising to build the new museum. Hopefully within two years, there will be a permanent home in the new location,” Norville said.

Stories will be told of the men who were freed from Andersonville and Cahaba prisoner of war camps and how they were overcrowded onto one boat. The Congressional Resolution acknowledges the incident as the greatest maritime disaster in U.S. History.

The new museum will demonstrate the conditions which caused the boiler explosions, show the workings of the steamboat propulsion and allow the display of fragile materials.

“We are really thankful and appreciative of Marion Public Schools for allowing us to take over the old building,” Intres said.