Posted on January 27, 2017 by caitlinjanczys 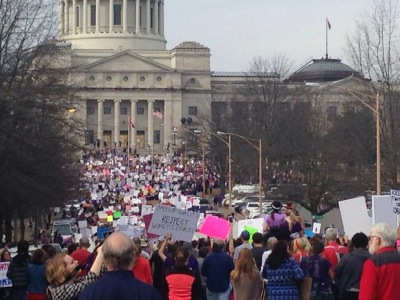 Participants march towards the capitol’s steps in Little Rock. (Photo by Trisitin Janczys)

LITTLE ROCK – People filled the intersection at Pulaski and Capitol streets, waiting behind a long purple marker. Police blockaded the surrounding streets, preparing for participants to walk. Thousands of citizens joined at the Capitol Saturday, Jan. 21, as part of the Women’s March.

Formally known as the Million Woman March, the Women’s March originated in Washington, D.C. What started as a simple rally turned into a historic movement as people in every state’s capital — and even countries around the world — marched in solidarity with the D.C. participants.

The Women’s March For Arkansas, designated due to its focus on women’s health and civic rights, was also an inclusive march. Its Facebook page stated, “This event is inclusive, and everyone who supports the rights of all is welcome. Our mission is to further the ideal of justice for all people who consider the United States home. Our vision is to educate and empower individuals to connect with like-minded allies to be the change they wish to see in the world.”

The mixture of genders, races, nationalities, religions and sexuality was hard to miss. Educators, lawyers, families and many more attended the event. Rebecca Spencer marched with her son, Jacob, a sophomore in college.

“We’re here just to march for social justice,” Spencer said. “It was an opportunity to share this with my son, to raise him to be a different white male in America.”

Jacob Spencer and his mother Rebecca Spencer hold signs for the march. Spencer runs the Allen House in Monticello. (Photo by Caitlin Janczys)

Quite a few educators marched in support as well, though some were reluctant to provide their full name in hopes of protecting their jobs. A self-identified professor from Arkadelphia said he marched for education as well as LGBTQIA rights.

“I believe education is very important,” Karr said. “I have a daughter, my friends are non-binary gender, and I also have gay/lesbian friends. It’s very important to represent for those people who are too afraid to come out and speak, and also to promote a positive attitude and emphasize how important education really is.”

Another educator named Shannon echoed similar feelings when it came to educational rights and being at the march for her child.

“I’m here because I have a 7-year-old daughter. I want her future to be bright and amazing, and I don’t want her to worry about any glass ceilings,” she said. “If I don’t stand up and make a difference, who’s gonna?”

As an inclusive march, many supported LGBTQIA rights.

“I’m here in representation of trans youth and women’s rights that are intersectional,” said Eliot, who supports equal representation for women from all walks of life. “We have to remember those in the margins who don’t get as much ‘air time’ as a privileged white woman might.”

Robert Polk moved to Little Rock a year ago from Dallas, Texas.

“The purpose of us being here is for promoting a better world,” Polk said. “The rights of equal opportunities, the respect of other women, LGBT, black, Afro-American, Latinos, you know all of us . . . just to make sure that the love is still there.” 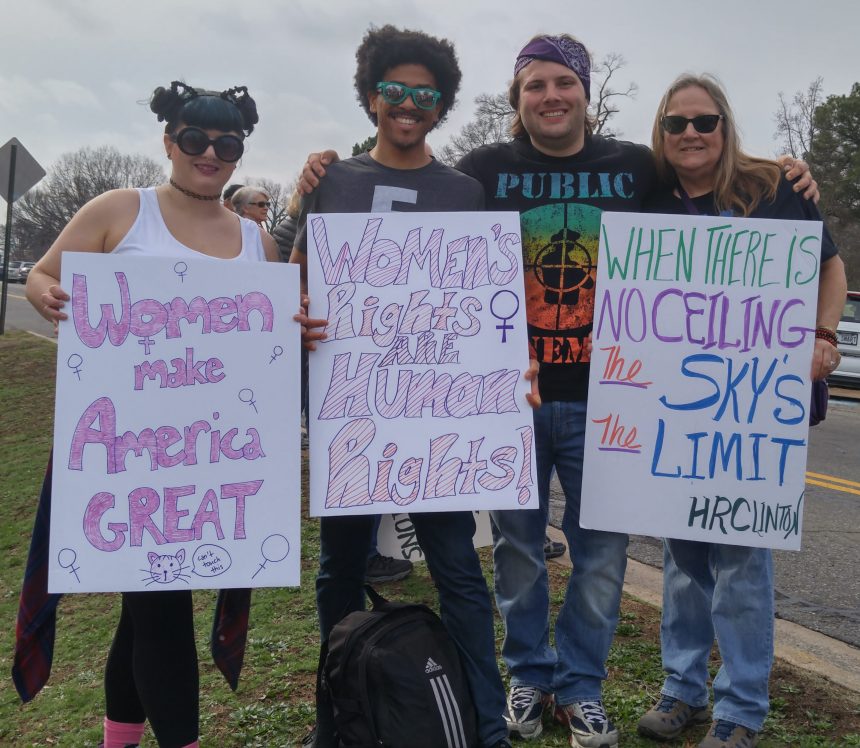 (from left) Jaimee Jensen McDaniel and husband Ron of North Little Rock, stand with Gavin Stewart and his mother, Sherri, of Mountain View prior to the Women’s March.

Cheers soon broke over the crowd in waves, signaling the 11 a.m. march to the directly facing Capitol building had begun. Marchers lifted decorative, bold signs high in the air and stepped over the purple marker.

“We Shall Over Comb!”

Many more signs would catch a person’s eye. Fists raised into the sky were also on prominent display. Chants could be heard over the roar of stomping feet:

Although the recent inauguration of the least popular president in modern times featured violent protests, the Women’s March in Little Rock was as peaceful as promised. The energy was high, and participants were kind and welcoming to each other.

The same feeling could be sensed across the country, including the main event in Washington, D.C. Breanna Francis from Marked Tree described the energy at the D.C. march.

“It was positive, and it was a true heartwarming experience for all,” she said. “The march on Washington gave me hope for the future of this country, and hope that things will get better.”

Back in Little Rock, marchers surrounded the Capitol as the organizers and speakers greeted them. At noon, participants observed a moment of silence for solidarity with every person participating around the country. Then the speakers took the podium to address the crowd, calling for everyone to become politically savvy and contact their congressional leaders to demand fair rights for all.

Overall, hope provided the driving feeling of the whole event from start to end. One of the speakers, Vivian Flowers, told the crowd, “This march is not about one man, one election; it’s about unity and harnessing our power in the face of ignorance.”