Posted on October 26, 2016 by christopherjameslee

JONESBORO – A new entry in the long-running shooter franchise, “Battlefield 1” drops players into the boots of soldiers in the Great War.

People cower in fear as titans take to the field to decide who will be victorious by Christmas. The conflict will be bloody but only one can be the winner. But enough about the holiday game release schedule; let’s talk about its most recent recruit, “Battlefield 1.”

Released Oct. 21, “Battlefield 1” represents the newest entry in the first-person shooter franchise of the same name. In “Battlefield 1,” players take the role of soldiers in one of the bloodiest conflicts in history: World War I.

World War I provides rarely tread territory in the gaming world. Factors for this could include a lack of a clear bad guy or the relatively static combat. DICE and Electronic Arts took it upon themselves to try it anyway.

This comprehensive review of the single-player and multiplayer campaigns tells you whether or not they succeeded. 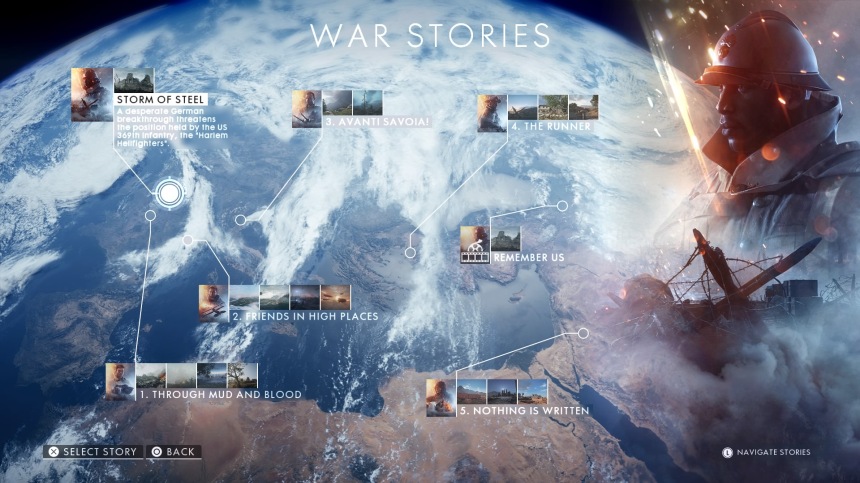 Single-player and Battlefield haven’t always had the best relationship.The lackluster Battlefield 3 and 4 campaigns to the relatively good Bad Company 1 and 2 show a hit-and-miss cycle.

For “Battlefield 1,” it seems developers at DICE focused extensively on the single-player for this entry in the franchise. “War Stories” covers the exploits of five soldiers of varying nationalities as they take part in the “war to end all wars.” From the mud of the Western Front trenches to the sun-scorched deserts of the Ottoman Empire, the campaigns provide a lot to experience.

While battlefield 1’s single-player is definitely a step in the right direction, it is not without its problems.

The good for “Battlefield 1” can be basically be determined from the writing. Each chapter is a self-contained story with it own characters and narrative. This allows each story to fully flesh out the characters.

Characters interactions are believable and their motivations are genuine. This leads players to form a connection with the characters and their efforts. Many good moments occur throughout the main campaign, but two stories stand out: Chapter 2 “Friends in High Places” and Chapter 4 “The Runner.” While I can’t go too far without spoiling them, I can say the endings will stick with you long after they’re over.

But with the good comes the bad, and Battlefield 1’s single-player is no exception.

The majority of campaign problems can be boiled down to one fact: time.

Clocking in at anywhere between eight to 10 hours depending on difficulty and play style, Battlefield 1’s campaign is noticeably short. While this doesn’t subtract from the quality, it does leave the player wanting more.

Luckily the format DICE used for the campaign — having stories be self-contained segments — does allow for the possibility for new chapters in the form of downloadable content.

But for many players, the most important questions lie in the multiplayer mode. 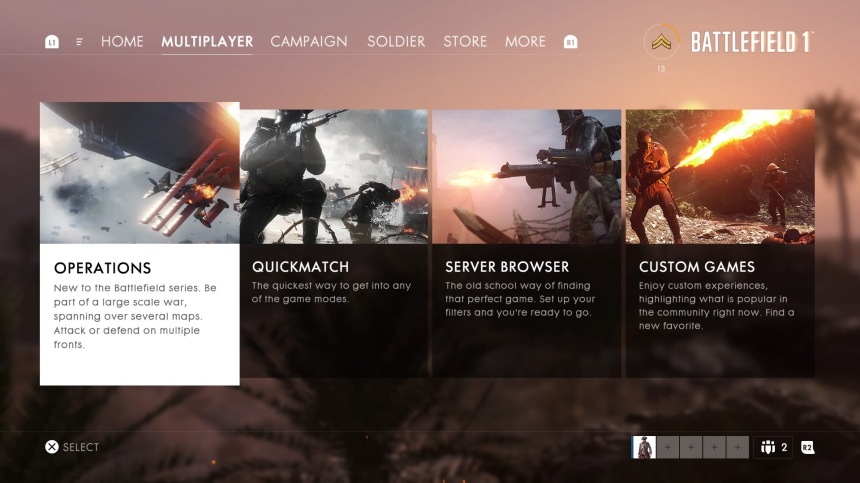 The multiplayer mode provides the most refined of all the “Battlefield” multiplayers so far.

Players can quickly grasp the controls and the objectives of each mode as they battle in many of World War I’s greatest battlefields. Achieving rank provides access to period-appropriate weapons and gear to increase your lethality in the field.

New game mechanics and modes increase the re-playability and make each match a fast-paced arena of chaos. But it’s good chaos.

Unfortunately, the multiplayer features its fair share of problems.

The biggest problem comes from the game balance. Some weapons and vehicles will cause players many headaches as they die repeatedly until they unlock the weapons they need to fight back.

This problem is worsened by the matchmaker. I found myself fighting players from a variety of levels sometimes having gaps as big as plus-or-minus 30 levels. This led to several unbalanced games.

While it has its problems, multiplayer produced the most fun I’ve had within a “Battlefield” in quite some time. The following video examines “Operations” from “Battlefield 1” multiplayer mode.

The romp through World War I left me in awe several times as I saw things I never expected to see brought to life in a video game. Whether a fan of the fighting or the history, “Battlefield 1” supplies plenty of enjoyable moments. I cannot wait to see what DICE and Electronic Arts has in store for the upcoming downloadable content.