TRUMANN, Ark. — The tensions between police and Americans have escalated in the last couple of years and it’s something that even smaller towns in the South are having to deal with.

Sgt. Chad Mason works as a detective with the Trumann Police Department. He doesn’t like the way police officers are portrayed in the media recently.

“We don’t put the badge and the gun on every day just to come to work and do bad and do harm against the community and the citizens,” he said. “It’s a constant negative about law enforcement doesn’t care, they’re just there to arrest you and take you to jail, so on and so forth.”

A factor that plays into this negative view is the number of deadly shootings by police in the United States.

According to The Washington Post’s Fatal Force database, officers killed 963 people in 2016. The database collects data from news reports, law enforcement websites and even social media reports. The number barely decreased from 2015, when there were about 2015 killings reported. So far, there have been 284 deaths in 2017.

In Arkansas, the database reports five people died in 2015, 15 in 2016, and four by April 2017. Mason realizes where the concerns come from, but he has an issue with those concerns.

“It’s a long line of bad stuff, so that the good stuff doesn’t get seen,” he said.

Stepping Out for Change

Mason and other members of the police department have taken steps to change that perspective, at least in his community.

“Every negative thing that society may see that a police officer does, I try to turn that into a positive,” he said.

To do that, the Trumann Police Department has started community-oriented policing. That means officers take time during patrols to stop and talk to people, to find out what problems they have and try to help them out. 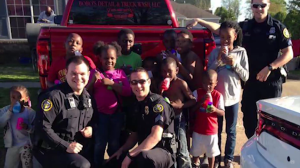 Trumann police officers interact with children as part of community policing. It provides an opportunity for residents to see police in a positive light. (photo courtesy of Sgt. Chad Mason)

One main audience for this approach: children.

He said he feels those kids need to see the officers as people behind the badge. During a citizen ride-along across town, Mason explained there isn’t a lot of recreational activities for children to do in Trumann.

“Some of that may or may not contribute to kids running out of stuff to do and getting in trouble,” he said.

He said he hopes their officers can show them there are better ways to spend their time.

“We try to be that mentor; we try to be that positive figure in their life,” Mason said. “Me and many officers are on a first-name basis with a lot of the kids and they see us driving around and they’re like, ‘Hey, hey Officer Mason or hey Officer Cook.'”

Another way they do it is being there for those in need. Mason said a girl once reported a bike stolen, so he and a couple of other officers pitched in to help her.

“I saw that she did everything right. She locked it down and someone still managed to get away with it,” he said.

People in Trumann have noticed that police are taking their time to build those relationships, including 21-year-old Dee Crockett.

“I see them if kids are out playing basketball they will get out of the trucks and play a couple games or something,” Crockett said. “It makes me feel like they actually care about it.”

However, he still doesn’t trust the police and he wouldn’t give a specific reason.

“They’re kinda crooked,” Crockett said. “I mean … it’s just, I know people and I’ve seen things. And you know, once you see it, you know.”

Mason doesn’t let that critique get to him. In fact, he welcomes critiques and is willing to talk to anyone who doubts what they’re doing.

“If you don’t understand something or if you want to see kinda what we do, come up here and fill out a form for a ride-along,” he said. “I’ll be more than happy to take you for a ride-along and you can see what deal with on a day-to-day basis.”