Junior Christopher Hill chose A-State because of the traditions and competitiveness.

“I came to Arkansas State’s program because of its tradition of bringing in athletes with a solid ethical foundation, which make us want to be more than just conference champions. We want to be national championship contenders,” Hill said.

Christopher Hill relaxes in the union after one of his classes.

Many memories can be made on the track team that result in creating bonds with teammates.

“During my freshmen indoor season at New Mexico Don Kirby Meet, I had a great experience watching professionals and collegiate run together, as well as enjoying my time with my teammates,” Hill said. “One of the benefits of being on the track team is creating memorable moments, friendships and inside jokes.”

The A-State coaching staff has new members and things are still running smoothly.

“The new staff members have suggested new ideas, which complements the ideas of staff members with years of experience. It’s phenomenal to see all of us working together,” Hill said.

Junior sprinter and hurdler Amari James of Little Rock decided to attend A-State because of the competitiveness of other athletes and the memorable moments experienced during his initial visit.

“A-State has produced multiple Olympians and the program is successful,” he said. “A-State was the only university that gave me a chance to run at the Division I level.”

“Going to Arizona and racing against Aries Merritt, the world-record holder for the 110-meter hurdles, was one of my most memorable moments,” he said.

“If we had more money, the team could own its indoor back track and weight room,” he said. 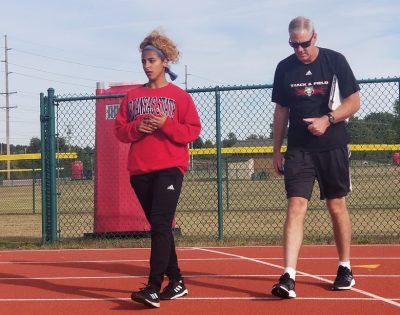 Other members on the track team like sophomore Jadyn Lewis, a North Little Rock native, had different reasons to come.

“The coaching staff, performance expectations and the campus atmosphere during my visit was the reason that landed me at A-State,” Lewis said.

“I feel as though the students and community should come out more to the track meets to enhance the atmosphere, that’s just my theory,” she said. “With the resources we have, the program is doing great. The men’s team won the indoor and outdoor conference titles and the women are right there.”