Driving service Uber is helping eliminate drunk driving one trip at a time. The app allows users to go out and enjoy themselves without having to worry about getting home safely.

The mobile app is simple to use and fair in price. Some citizens think highly of the service.

“Uber is a hot topic right now,” said Melissa Herman, a customer at Brickhouse Bar and Grill in downtown Jonesboro. She said she is grateful for Uber’s service to the community.

Taylor Cagle, who was with Herman at the bar, also had nothing but positive reviews. She even considered driving for the company. She said her boss swears by Uber.

“It’s great,” said Krysti Breyette, a bartender at Cregeen’s Irish Pub. “A lot of people drink and use Uber. It’s not uncommon to see an Uber or Lyft outside waiting to pick someone up. It has cut down on drinking and driving.”

Breyette said Uber is saving lives by offering its service. 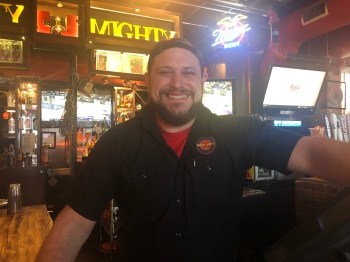 Jordan Wooten enjoys the “calm before the storm” on a slow Saturday afternoon at Brickhouse Bar and Grill. (Photo by Jessica Ladd)

“Uber absolutely is preventing drunk driving,” he said. “You can see someone get into an Uber and know they’ll make it home safely. It’s an app. Even in your worst state, you can use it.”

Uber breaks down the process of using its app into five steps on its website:

Wendell Vovo started driving for Uber in August 2017. He also claimed Uber is cutting down on drunk driving. He said the community appreciates Uber’s service.

“A lot of people are so thankful for it because they have gotten tickets in the past,” he said. “You go and spend $60 on a drink and wind up paying over $2,500.”

In the United States, two out of three people will be involved in a drunk-driving incident within their lifetime. Partnering with Mothers Against Drunk Driving and creating the hashtag #DesignatedRider, Uber is encouraging people to make safer choices.