JONESBORO, Ark. – The sharp smell of barbecue, the clouds of charcoal smoke, a big crowd eating meat and cheering up with concert music  – the 8th annual Downtown Jonesboro BBQ Festival proved a success.

People from all over the region traveled to Northeast Arkansas to participate in the contest and enjoy what Jonesboro has to offer. The Kansas City Barbeque Society sanctioned the event.

The contestants could not sell their foods from the grill, which would have been deemed a health code violation. Still, they could provide free samples of their food.

“Last year, we had nearly 18,000 people coming to the festival and this year we were expecting more. Though I didn’t have the chance to get on the street, I heard it was a record-breaking crowd. We even had visitors from Nashville,” McCall said. “I believe the festival is a great chance for the local vendors to earn a good amount of money and also make a good marketing of their business. I would say, with the limited electricity in downtown, we had a great response this year.” 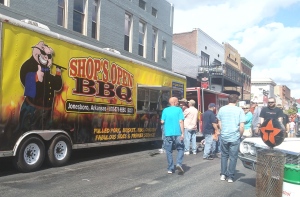 Visitors line up to purchase barbecue. They could also get free samples from contestants. (Photo by Myful Al Sarah)

Michael Sullivan, owner at the Sully’s in downtown, sold his popular Chicago-style food on the street in front his restaurant. He said he participated in the festival for the second time after a good experience in 2015.

“The festival is a great opportunity for us to make some money. It’s difficult to do business in the downtown most of the year,” Sullivan said. “We have already had a good start from this morning. By the time of the evening, it’s going to be crazy busy here, you will see a huge crowd.”

Neither the events nor the concert cost anything due to sponsors including St. Bernards Healthcare, The Sun, Bartel’s, Ritter and The Fox 104.9.