Posted on May 18, 2018 by christopherjameslee

“Star Wars Battlefront 2” marks a rather controversial entry in the long-running first and third-person shooter franchise. Players fight in single-player and multiplayer, whether on the ground or in space in some of the best battles from the “Star Wars” films.

With an underwhelming predecessor and negative press connected to it, the game started off shaky. Over the months leading up to the game’s release, critics and fans alike flamed the game for the potential “pay to win” elements found in the game during the open multiplayer beta back in October.

The game went through many changes since then, with the game developers addressing many of the problems. This comprehensive review of the single-player and multiplayer campaigns determines whether the game lives up to its ancestors.

The “Battlefront” franchise provides an interesting history with single-player campaigns. The first “Star Wars Battlefront” in 2004 did not have a cohesive campaign.

The sequel, 2005’s “Star Wars Battlefront 2,” offered a great, dedicated campaign following the exploits of a clone trooper in various battles from the films.

The story revolves around Iden Versio, an Imperial special forces commander, as she leads her unit, the “Inferno Squad.” The campaign follows her exploits after the destruction of the second Death Star, during the Emperor’s mysterious “Operation Cinder.”

The “Star Wars Battlefront” of 2015 lacked a single-player campaign, earning points in the sequel’s favor. The campaign pleasantly surprised me with high quality, but some flaws stuck out.

The creators designed one of the most beautiful games I ever played. From the characters to the environment, everything looks amazing and creates the feeling of actually being in a “Star Wars” film. The visuals, combined with the excellent sound design, create a truly immersive experience.

Along with Iden, players have the opportunity to play as and alongside famous “Star Wars” characters.

To avoid spoilers, this review will not go into much detail about the campaign’s story, instead focusing on the impressive campaign features.

As players travel through the campaign, they will see moments pulled straight from the “Star Wars” universe, both from films and other media like Marvel’s “Star Wars: Shattered Empire” comic series. These moments come to life from the perspective of Iden as she fights her way through memorable battles.

This brings me to one of the most impressive visual elements: character designs.

Many of the characters in this game look just like their real-world actors and actresses. Iden, portrayed by Janina Gavankar, provides one of the best examples. The motion-capture work and facial animations made her performance come to life.

Overall, the solid performances and great character chemistry round out the single-player.  Misty Lee, one of my favorites, does a wonderful job filling in for the late Carrie Fisher as Princess Leia.

Great story and characters, however, do not make a game. Gameplay remains the most important part of a game, and “Star Wars Battlefront 2” does not disappoint.

A small number of Iden’s many abilities. Photo by Christopher Lee

Iden utilizes several abilities available to her as she fights her way through the smooth and fast-paced combat.

DICE uses the single-player as an opportunity to introduce players to all the sides of combat they will face in the multiplayer game option.

The single-player section involves ground and space combat connected with vehicle sections and action. All this comes together to make the gameplay both fun and cinematic.

Very few game developers can make the gameplay feel like a movie like DICE can. Players really feel the seamless gameplay as they sprint, shoot and roll to victory.

I enjoyed the single-player campaign more than I thought I would. From the characters to the settings, it all came together to form a well-structured narrative. Unfortunately, the campaign possesses noticeable, unavoidable faults.

Almost every bad thing about the campaign comes from its length. While I enjoyed every moment of the campaign, I must mention its disappointing length.

Clocking in anywhere from four-to-six hours (depending on the difficulty setting), the campaign comes across as too short. This short length brings one of the biggest problems of the campaign to the forefront: the pacing.

This game goes way too fast. The game seems to move at breakneck speed from one location to another, and this only hurts the story overall.

Important decisions, clashing loyalties and huge game-changing events seem to fly by. Spending more time developing the characters and their motivations would have been better.

DICE did a fantastic job with the campaign. Even with a short length and overly-fast pace, The story’s pros outweigh the cons. The way DICE integrated Iden’s story into the established “Star Wars” canon makes it a “Star Wars” experience.

The following video showcases “Star Wars Battlefront 2” at its finest. Watch Iden fend off the rebel attack on Fondor Station.

Most of the good about the multiplayer gameplay comes across as “second verse same as the first.” The fluid, fast-paced combat shines in the multiplayer, rewarding skilled players without punishing newer players.

The multiplayer shines in the maps and the game modes, an area where its 2015 predecessor failed. It appears DICE listened to the complaints.

The game came out with 11 maps and five game modes. DICE planned to add more maps later through free downloadable content and updates – a major step forward after the rather disappointing 2015 release.

The addition of free content proved to be a step in the right direction, but it resulted in one the worst criticisms towards the multiplayer.

Overall, I found myself being fully immersed in the beautiful maps as I fought in some of the most iconic locations in the films. The maps and modes vary in terms of gameplay and should keep a player invested for many hours.

See an example of galactic assault gameplay. Watch the defense and attacking phase of the planet Jakku from “Star Wars Episode VII: The Force Awakens.”

Watch the video below to see just what Starfighter Assault offers.

Finally, players can find out who would win in a fight between Yoda and Darth Vader. The game mode proved to be pretty self-explanatory.

A small-scale take on the established heroes-versus-villains format. Find a friend and fight the forces of good or evil in two-vs-two combat. P.S. Don’t split up.

This mode boils down to a smaller-scale galactic assault match. Its fast-paced combat usually revolves around capturing an objective and getting it to a location for extraction.

They may be fuzzy but they prove to be ruthless. Join a group of stormtroopers as they try and survive, or hunt them down as one of the cute little murderers. This mode will only be available for a limited time.The multiple maps and game modes come together to form a fun, exciting experience. This may be the most fun I experienced with a shooter in some time. But, even the best experiences have flaws.

One of the biggest problems with the game tends to be balancing. While the game designers mostly balanced the weapons and vehicles, the maps provided the main problem.

More than a few maps seem to lean heavily to one side or the other. Winning on these maps can feel far more difficult than needed. Of course, this can vary greatly depending on the map, enemy team skill level and team composition.

Updates to “Battlefront 2” felt slow with many content updates being separated by months of waiting. Long wait times are ok if the final product lives up to it, but updates tend to fall flat.

The first large-scale update coincided with the release of “Star Wars Episode VIII: The Last Jedi.” Since then the majority of the patches have focused on balancing heroes, rebuilding the progression system and quality of life changes. All necessary and appreciated, but content felt lacking since December. Though it appears the waiting might be over.

As of the writing of this review, the two most recent updates from April and May have included the addition of a new temporary game mode, Ewok Hunt, and a new content update to coincide with “Solo: A Star Wars Story.”

With the inclusion of new monetization options after the removal of loot boxes maybe updates like these will become the norm. That brings me to the most important part of the review.

The Ugly, or What Used to Be

The character progression system brings the biggest problem. This sentence meant something entirely different with the game’s original release. Now it summarizes many the problems “Battlefront 2” currently face.

Originally, players could equip upgrades to their favorite classes, vehicles and heroes to fit their favorite play style. These upgrades, called “star cards,” could offer anything from a few seconds off an ability timer to completely changing how the character plays. While still true today, game creators changed how players unlock these upgrades. 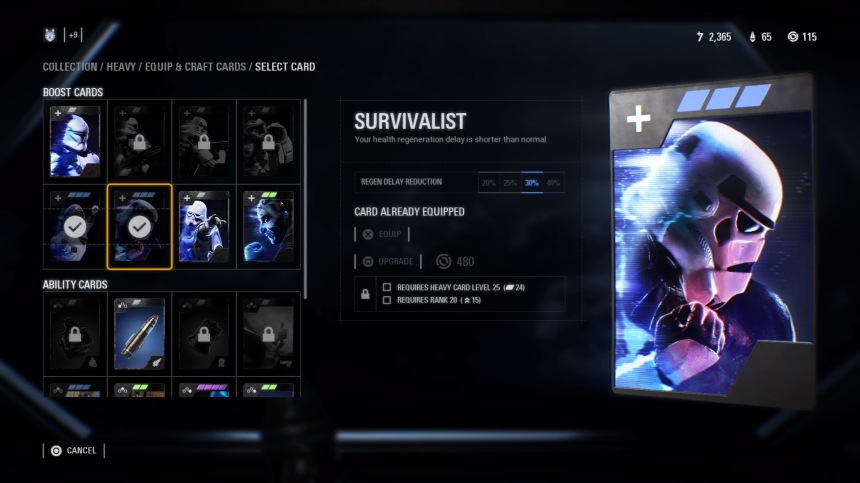 Example of the old progression system. Photo by Christopher Lee

Players unlocked star cards in one of two ways, but both ways relied on the same system.

Players earned three forms of in-game currency: credits, crystals and crafting parts. All of it revolved around the “supply crate” system.

Players could earn star cards from supply crates. Each crate gave the player the possibility of earning any star card up to a certain rarity. The real problem came from how players acquire supply crates.

Players earned credits just by playing the game. Credits purchased supply crates, which carried star cards and crafting parts. Crafting parts could craft and upgrade star cards, and the best star cards could only be gained through crafting.

While confusing to newer players, it also came with another, bigger problem.

When the game first released Nov. 17, players could purchase supply crates using real-world money. This created backlash from the fans.

Fans called this a “pay-to-win” system, where players could spend real-world money for in-game advantages. DICE answered by removing the option to purchase “supply crates” with money.

“Star Wars Battlefront 2” made up only one part of a much larger controversy involving several different games. To considerably shorten this review, check out this article breaking down the history of the controversy.

As players level up classes they earn skill points which are spent leveling up star cards. This new system stream-lined the progression and rewarded players for playing their favorite classes.

This change brought new life into the game and turned the ugliest mechanic into the simplest.

Despite its flaws, this game provides one of the best shooters I have played in a while. The fun and immersive game play makes me feel like my skill matters during fights, as my many deaths playing as a sniper showed me.

Overall, the multiplayer left a positive impression. I think DICE fixed many of the games biggest problems and could easily fix the rest.

The legacy the unrewarding progression system left behind leaves me more emotionally conflicted than Luke Skywalker after Darth Vader said, “Luke, I am your father.” On the one hand, DICE and EA acknowledged their mistakes and took action to change them, but on the other hand, they tried implementing a clear pay-to-win system in the first place.

Newer players should enjoy the multiplayer just fine, but I wonder how many of the original playerbase like myself left because of how bad it used to be.

My time with “Star Wars Battlefront 2” proved to be pleasant and immersive. Short-but-fun single-player combined with fast-paced multiplayer creates a delightful experience.

The game shows several good ideas, but, even with the potential of the progression system, things still need some ironing out.

With the recent changes to the game and the new reduced price, I don’t see any reason to not pick it up.

Even with all of its problems, I still consider it to be one of the best “Star Wars” games I’ve ever played. I just hope DICE and Electronic Arts learned from its mistakes.

(See how to progress here)