Save Pets From Frigid Temps

JONESBORO – Frigid temperatures may be inconvenient for humans but pets have a tougher time combating the weather.

When temperatures plummet into the teens and single digits, commuters don extra layers of warm clothing such as scarves and mittens to stay warm. But pets do not have the same options.

The Humane Society changes much of its routine when temperatures get so harsh.

“It’s definitely an issue,” said Kelly Pickering, kennel manager at the NEA Humane Society. “On Jan. 31, it was 18 degrees with a windchill of 8, so we couldn’t even take out two rows of animals at a time. We would only take out about two dogs apiece, clean two kennels, get them dry and bring those two back in. They weren’t outside more than 15 minutes.”

Weather permitting, these animals typically stay outside from breakfast to lunch (around 1:30 p.m.) while their kennels get cleaned. The cold weather forces the process to speed up and keeps the animals caged longer than normal.

Some dogs have the luxury of taking human-like precautions, but they need a bit of assistance. 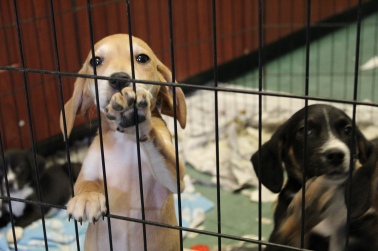 Caged puppies wanting attention during the polar vortex. Too young to be put with the general population, they got a cage all to themselves. (Photo by Chase Gage)

“With some of our smaller or malnutrition dogs, we put sweaters and jackets on them. I’ve never had a crew that likes to dress dogs up as much as our current crew. It’s not a chore to them. They thoroughly enjoy it,” Pickering said.

Homeless pets may be regulated during these conditions, but pets with homes face similar dangers. Depending on the breed of the dog, warm and cool temperatures will affect them differently.

“Any time the weather gets below freezing, there should be some serious consideration on bringing your dogs inside,” said Ancel Jines, a local dog trainer. “It varies based on what breed of dog you have and how acclimated it is to the weather.”

Jines said some breeds, such as huskies and German shepherds, have multi-layered coats that keep them warm during harsh conditions. However, dogs such as beagles and dachshunds have single-layered coats that aren’t much longer than a human eyelash. These animals struggle to stay warm in the cold, especially when it gets below freezing.

The weather itself is of great concern to pets, but diseases during cold weather may be more dangerous. The polar vortex itself may not cause direct harm to animals in the region, but its effects very well could.

“The key to animal health is cleanliness,”” Pickering said. “We have to be really cautious about overcrowding. When we have a large population and they’re not getting out and just being confined, that’s when you’re set up for an outbreak of disease. We just have to watch out for abnormal behavior. At the first sign of anything unusual we get them to our medical team.”

Melissa Grigsby, a veterinary kinesiologist at Hilltop Veterinary Hospital, said there have been no reported cases cold-related injury but claims the weather is still very much a concern.

“We haven’t had any specific cases recently (directly attributed to the cold weather). However, due to the rain and the cold, we have had a lot of parvo cases come up,” Grigsby said. “Just because we haven’t seen any cases yet doesn’t mean they’re not out there. We would worry about shelter, water being frozen, stuff like that if they’re outside.”

During harsh weather, make sure to take care of loved ones, especially the four-pawed kind that cannot care for themselves.