Posted on February 13, 2019 by Denton Postlewait

JONESBORO — Baseball fields ignite nostalgia. The crisply painted lines, clean-cut outfield and raked dirt take anyone who has ever picked up a ball glove back in time.

Some people forget about the crew that puts it all together. Arkansas State baseball managers, aka the unsung heroes of the team. They put in hours behind the scenes to make sure the field and the team stay ready for game day.

“We’re normally here three or four hours before a game,” said Brandon Little, a sophomore manager from Pocahontas. “The first thing we do is batting practice. Then we put the bases in, drag and water the field, and bring out the baseballs for pregame and the game.”

Little, along with Dylan Owens, a sophomore from Cabot and Tristan Thompson, a freshman from Pocahontas, make up the managers for the A-State Baseball team. They balance their school and social lives around a sport that they love. They do more than just make the field look pretty, though. 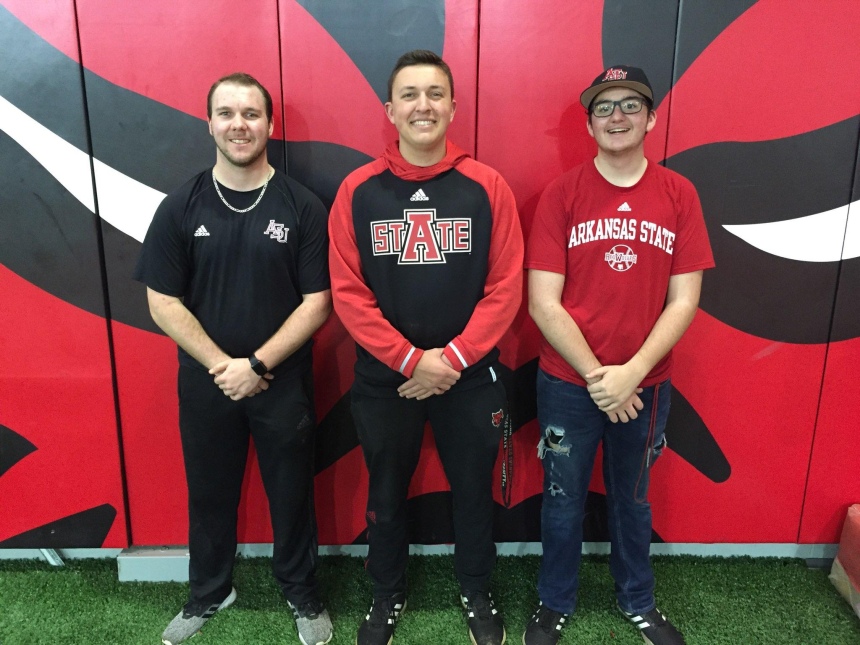 “We set up the L-Screens in the batting cages to protect the person running the drill. We set up the ‘Turtle’ for batting practice and our biggest job is making sure the infield is properly managed,” Owens said. The “Turtle” — a large, shell-like cage — does not allow foul balls to go up or outside of the batter’s box.

Another part of the managers’ job involves what Little called “dirt maintenance.” This entailed adding a substance to the field to absorb the excess water. However, if the field is extremely wet, they use another method.

To get the tarp off the infield with water on it, the managers and players make a funnel. Players and managers drag the tarp and the water down the first base line. Once everyone is in position, they all hold the tarp up and the water runs down towards the drains behind home plate. Then, one person gets under the tarp and pushes up to get the water off the tarp. This responsibility goes to Noah Stone, aka “The Lion,” according to the managers.

When the team travels, the managers do not get a break. They also travel with the team to away games to ensure the team can fully focus on the opponent. During home games, the managers also handle the opposing team’s laundry and they coordinate their weightlifting schedule on campus.

A lot of work goes into preparing everything, but the hardest part: laundry and “hula-hoeing.”

“Laundry takes the longest and it is the worst,” Thompson said. “Louisiana made me rewash their uniforms. They complained that it was wrinkled or something. Most of the time teams are not specific, so we do it the same way we maintain our uniforms. I guess they didn’t like it.”

Owens said hula-hoeing cuts weeds. According to www.planetnatural.com, the hula hoe “slices away weeds and other undesirable growth, without displacing topsoil.”

“If you go into the outfield, it’s a disaster because we weren’t here to maintain it during the break. It’s hours of work to get the weeds out,” he said.

Being a manager requires a lot of hard work and dedication. Little, Owens and Thompson said the best part of being a manager is being with the team.

“We’re all pretty good friends at this point. They don’t throw things at us too often,” he said. “They’re really good guys and it adds a lot to the job.”

Although the managers do not play, their love for the game keeps them close to the sport.

It may seem like the managers do a ton of work, but they love the sport. As the saying goes, “Do what you love and you’ll never work a day in your life.”  Laundry, hula-hoeing and waking up early for practice may tough, but the managers love America’s game. When driving past a baseball field, take a second and think about those who prepare it. Being a manager requires a balancing act, but A-State baseball would not be the same without theirs.